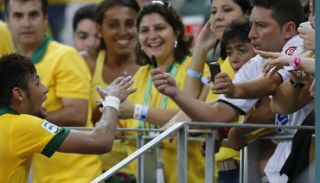 "I'm Brazilian and I love my country. I have a family and friends who live in Brazil. For that reason, I want a Brazil which is more just, safer, healthier and more honest," he said on Facebook.

"The only way I can represent and defend Brazil is on the pitch, playing football. From now on, I will enter the field inspired by this movement."

Neymar wrote the message shortly before Brazil faced Mexico in the Confederations Cup where he scored one goal and brilliantly set up a second in the hosts' 2-0 win.

"I'm sad about what is happening in Brazil," he added. "I also had faith that it would not be necessary to get to the point of going on to the streets to demand better transport, health, education and safety, which is the government's obligation.

"My parents worked hard so they could offer me and my sister a minimum quality of life," he added

"Today, thanks to the success which you have brought me, it might seem demagogic on my part, but it isn't, to carry the flag of the protests which are happening in the whole of Brazil."

The nationwide protests were sparked last week by transportation fare increases, which came as Brazil struggles with annual inflation of 6.5 percent, unleashing a tide of complaints that caught authorities off guard.

Contrasting the country's high taxes with its ramshackle schools, hospitals and other government services, demonstrators have criticised the 28 billion reais ($12.9 billion) of public money being spent on preparations for the World Cup, to be played in 12 Brazilian cities.