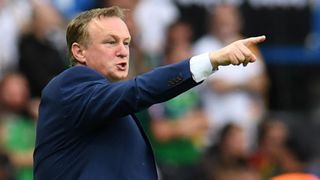 O'Neill led Northern Ireland to the knockout stages of Euro 2016 before Gareth McAuley's own goal saw them lose 1-0 to Wales, but the coach's reputation was greatly enhanced.

Nicholl claimed O'Neill should be given the chance to manage a Premier League or Championship club, with Northern Ireland captain Steven Davis recently suggesting O'Neill could manage his team, Southampton, before Claude Puel filled the vacancy left by Ronald Koeman's move to Everton.

"The big job for Michael - I think it will happen. He is very clever," Nicholl told BBC Scotland.

"Not that we've spoken about it. He's very quiet. He keeps his cards close to his chest. He's shrewd. Put it this way - it won't faze him.

"I think he deserves it - at least a Championship club down in England - the way he goes about his job."

Nicholl added Northern Ireland goalkeeper Michael McGovern could also be in line for a switch from his club, Hamilton, due to his international performances and the fact he is out of contract.

"I watched Michael seven or eight times last year and I saw Hamilton got beaten three or four-nil, but he stopped them getting beaten by seven or eight," Nicholl said.

"Michael got his opportunity against Scotland at Hampden. Big Roy Carroll was injured at the time, he got his chance and he took it."

Northern Ireland may have lost to the eventual winners of Euro 2016, Nicholl suggested, after their conquerors Wales shocked Belgium 3-1 in Lille on Friday to book a semi-final against Portugal.

"It was a magnificent experience and I had a magnificent time," Nicholl said. "When we went out against Wales, we were really down.

"Although it was a great experience, you think: Imagine going out the way we did. And then, when you look at what Wales did to Belgium, all of a sudden it does not look too bad.

"Maybe we will have gone out to the winners. Who knows? So it picks you up."