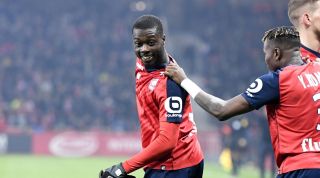 Jurgen Klopp is looking to add to his forward line this summer as the Reds attempt to overhaul Manchester City at the top of the Premier League.

The German is a big fan of Pepe, who scored 22 goals to help Lille to a second-place finish in Ligue 1 last term.

However, Inter are also keen on the Ivory Coast international, with new boss Antonio Conte hoping to get a deal over the line.

And according to L'Equipe, the Serie A side have submitted a huge £80m offer for the winger.

That puts Inter at the front of the queue to sign the 24-year-old, who is currently representing his country at the Africa Cup of Nations.