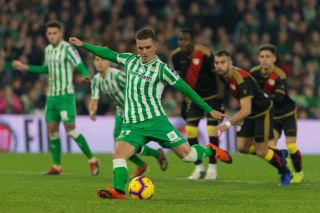 Maxi Gomez arrived in Spain as an unknown 20-year-old, signed for a measly €3.5m from Uruguayan side Defensor Sporting’s impressive conveyor belt of youth. He would leave this summer as a proven La Liga hitman, the scorer of 32 goals in 71 games and a much more well-rounded forward.

A strapping, physical presence, Maxi has lead Celta Vigo’s line for two seasons. In that time, his link-up play has gone from rough to competent, while his goalscoring nouse has never been in any doubt. The Uruguay international is very perceptive in the box, a handful in the air and unafraid to be cynical and sly. Maxi is capable of holding his own in the Premier League, as his potential ceiling continues to rise. His release clause stands at €50m – and he can’t be regarded as a gamble.

Since taking his permanent leave from Real Madrid’s B team, Mario Hermoso has proven that perhaps his former club should have invested a little more patience in him. Leaving at a time where Los Blancos were well supplied with consistent central defenders, their loss has been Espanyol’s gain.

Luis Enrique has given Hermoso minutes within his Spain set-up over the last 12 months, a just reward after two excellent La Liga campaigns. Strong in the air and very competitive in the tackle, Hermoso also has the technique and calm to aid his side as they play out from the back. A fantastic blend of combative and composed, Hermoso is a worthwhile investment for any top side while still at the age of just 23.

Last season was a frustrating one for Junior. Having broken into the first-team scene after impressing for Betis’ B side, the 22-year-old quickly became the first-choice left back under now-departed coach Quique Setién. Energetic and capable of covering enough ground to act as an adventurous modern full back, Junior is also no stranger to reaching the opposition byline.

His defensive work is perhaps a little less refined, but his commitment to the cause in attack offer plenty of optimism with regard to how the Spaniard can continue to develop with regular minutes in the short-term future. LaLiga’s 2018/19 campaign saw Junior miss 18 games due the injury. Once he gains back some momentum, his trajectory should continue sharply upward.

Real Betis pulled off a business masterstroke upon loaning Lo Celso from PSG. Able to move and complete a permanent €22m deal for the Argentine towards the end of the campaign, Betis are now in a Luka Jovic-esque bargaining position.

Scoring nine goals in 32 appearances, the top scorer for his current squad, his cutting edge and vicious left foot were a source of real danger. Capable of taking aim from range, as well as having the close control and dribbling ability to make things happen on the move and cut apart defences, Lo Celso is a top creative outlet who has plenty of room for improvement given that he is still just 22. For any sides who are looking to turn possession into chances, this exciting young midfielder has plenty to give for both club and country.

Plenty has been made of the fact that Pep Guardiola hasn’t got a deputy for key midfield general Fernandinho at Manchester City. Rodri would go a long way to easing that particular concern. Having anchored both Villarreal and Atletico Madrid’s midfields over the last two years, the 22-year-old has the intelligence and maturity that is required to drop in and help his side play their way through upfield.

The 1.91m tall midfielder contributes a good range of passing, composure and spatial awareness are excellent, while his lanky frame ensured that he can protect the ball neatly when caught in close-quarter situations. When playing under a coach such as Guardiola, the options for future improvement and a better understanding of the game are endless, an environment that could take Rodri from an already very impressive young player to an undeniably world-class one. Positionally, the Spaniard is intelligent, perhaps one of the most useful traits to have before becoming a vital cog in a Guardiola machine.

Quiz! Can you name these 40 national teams by their nicknames?