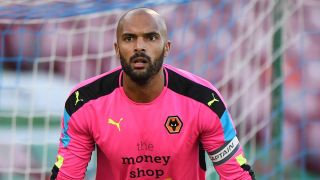 Nigeria will offer Carl Ikeme a coaching role after the goalkeeper announced his retirement from football.

Former Wolves keeper Ikeme said on Friday he was hanging up his boots on the advice of medical experts after spending the last 12 months battling acute leukaemia.

The 32-year-old is in remission but opted not to attempt to prolong a playing career that saw him make 274 domestic career appearances in all competitions.

Ikeme did not confirm his future plans but he will be given the chance to work with the Super Eagles.

Nigeria Football Federation (NFF) general secretary Mohammed Sanusi said in a statement: "The NFF will find the resources to send Carl Ikeme on a coaching course, and afterwards absorb him into the technical crew of the Super Eagles.

"That is the least we can do for such a dedicated patriot. He was an embodiment of absolute dedication, commitment and patriotic fervour in the games that he played for the Super Eagles.

"The circumstances of his retirement from the game are somewhat depressing, even as we thank God for his life."

Ikeme made three appearances for Nigeria during their qualifying campaign for the World Cup and was expected to travel to Russia 2018 as part of Gernot Rohr's squad prior to his July 2017 diagnosis.