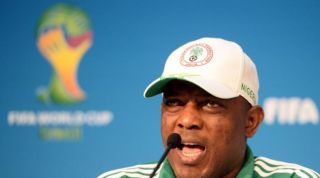 Keshi resigned from his post after the side's FIFA World Cup exit in the second round against France.

Nigeria lost 2-0 to Didier Deschamps' men, and the build-up to the clash had been overshadowed by the squad refusing to train in a row over bonuses for progressing beyond the group phase.

In the wake of the tournament, the team were also briefly suspended by FIFA for political interference, although that sanction was lifted shortly afterwards.

Following a meeting between officials on Thursday, it was declared that efforts would be made to contact Keshi about a return to his previous role.

"The executive committee mandated the technical sub-committee to open channels of communication with Mr Stephen Keshi with a view to extending his contract, as the NFF is still interested in working with him," a statement read.

"The technical sub-committee is to report back to the executive committee within one week."

In light of the financial squabbles that blighted Nigeria's tournament, it was also stated that any such issues would be dealt with ahead of finals in the future.

"All financial issues with players and officials must be thoroughly deliberated upon and agreed ahead of major matches and competitions, to avoid the kind of embarrassment brought upon the nation at the 2014 FIFA World Cup finals in Brazil, when players boycotted training sessions before the round of 16 match with France," the statement said.