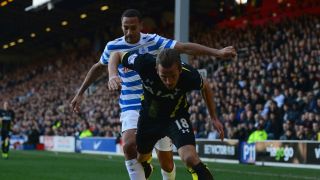 Spurs travel to face United on Saturday with the sides locked together on 20 points apiece after nine matches as the closest challengers to early pacesetters Manchester City in the title race.

The England striker was substituted during the closing stages of Spurs' 4-1 win over Liverpool last weekend, holding his hamstring after scoring twice.

Kane has already scored 17 times for club and country this term and, although Ferdinand acknowledges there is plenty to admire about Spurs, he feels any significant absence for their star forward would leave them badly damaged.

Asked whether Tottenham were genuine title challengers, Ferdinand said: "If Harry Kane stays fit then yeah; if Harry Kane gets injured, no chance.

"They've got no one to replace him who's going to get that amount of goals. He's a talisman.

"He's not all Tottenham, don't get me wrong – I'm not saying they're a one-man team – but to go and win a league you need a number nine who's going to be banging in goals.

"Outside of Harry Kane in that squad I don't really see anyone else doing it."

Kane's prolific form of late has seen him mentioned in the same breath as Lionel Messi and Cristiano Ronaldo.

Ferdinand believes his exploits make him worthy of such lofty comparisons but insists the challenge for the 24-year-old is to maintain such levels for years to come.

"He can be talked about at this point in time, in terms of goals alone, with Cristiano Ronaldo and Messi because he has the same number of goals as those guys," he said.

"I'm not saying he's comparable to them as players, because he isn't. They've been doing it for 10, 12, 13 years at the top level, blowing away all statistics in terms of goalscoring and winning things.

"He's now put himself up there as the top goalscorer in Europe, so he can be talked about on those levels.

"But he's got a long way to go. Greatness comes with consistency. He's been top goalscorer in England for a couple of years, now he's in the Champions League and starting to do very well there.

"We have to give him time to prove himself because we've all seen far too often some strikers come in and blow the league away, blow a Champions League season away for one or two years and then we don't see them again.

"I don't believe Harry Kane is going to be like that but he needs the time."

United must reassert their title credentials this weekend after lacklustre showings at Liverpool and Huddersfield Town.

Despite Spurs earning plenty of plaudits of late, Ferdinand expects the race for glory to ultimately be an all-Manchester affair

"When you're a Manchester United player, that's the pressure that comes with it. The history suggests that you win titles and they've not done that for a number of years now," he added, with United last winning the Premier League as he starred in 2012-13.

"The fans want that. The fans and the club have given Jose Mourinho that bit of time. He's gone out and invested heavily, very well.

"But now he' got to go and produce. The problem he's got is a very, very talented and strong City team who are performing and look the form side at the moment.

"It's going to be a battle. I believe it will be a battle of the two Manchester clubs."