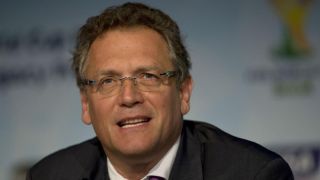 On Tuesday, it was announced that a FIFA task force had recommended the last two months of the year as the best time to hold the finals, with temperatures in Qatar in the traditional months of June and July regularly soaring above 40 degrees centigrade.

Although the likes of UEFA and the Confederation of African Football backed the recommendation, major European leagues such as the Premier League and La Liga opposed the notion, with a final decision to be made next month.

A November-December World Cup would create logistical problems for many domestic leagues but, in a press conference on Wednesday, Valcke said that compensation would not be paid.

"There are seven years to reorganise," he said.

"I think we should just accept it... why should we apologise for the decision made yesterday.

"It's not perfect, we know that - but why are we talking about compensation?

"It's happening once we're not destroying football. Why are we screaming and saying it's not possible? It is possible.

"For sure, it helps in the relationship not to have any fights with anyone.

"That's why in March we can make this decision without any risk that someone will challenge the decision of the executive committee."

A shorter tournament - from 32 to 28 days - has been confirmed, while December 23 has been mooted as a possible date for the final.

Meanwhile, the 2023 Africa Cup of Nations will be moved from January to June.