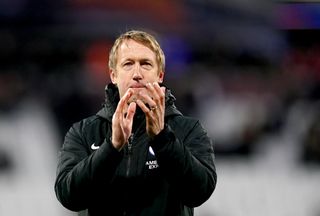 Brighton manager Graham Potter has no fresh injury concerns to deal with ahead of his side’s Premier League clash with Watford on Saturday.

In a further boost for the Seagulls boss, Shane Duffy trained on Thursday, after he missed the West Ham match following a minor operation, while Dan Burn has been making progress from a shoulder injury.

New signing Tariq Lampty has been settling into the squad, but the manager suggested Saturday’s match could come too soon for the former Chelsea player.

Tom Cleverley returns from injury for Watford in their Premier League trip to the south coast.

The former Manchester United man has been sidelined since October with an Achilles injury.

Kiko Femenia (knee) is nearing full-fitness, while Ismaila Sarr (hamstring) is unlikely to feature. Adalberto Penaranda is available after returning from his loan spell at Belgian side Eupen.