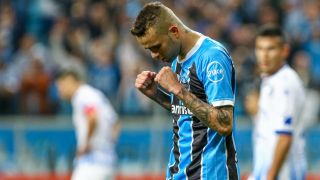 Gremio have revealed they are yet to receive an offer from Liverpool for Brazil forward Luan, who is also the subject of approaches from Sampdoria and Spartak Moscow.

Liverpool were reported to have sent a scout to South America to watch Luan in action in Wednesday's 2-1 Copa Libertadores victory over Godoy Cruz, while Arsenal are also thought to be interested.

However, vice-president Odorico Roman insists the club have received no communication from the Reds regarding a potential swoop.

"I do not know of any other proposal," he said. "We had two firm approaches, from Sampdoria and Spartak.

"They were made, but Luan remains as a Gremio player at the moment."

Discussing his future on Wednesday, Luan said: "I will decide soon. My thoughts are still on Gremio.

"I saw people on social media asking me to stay. I know of the proposal [from Spartak] but we have to decide.

"On Thursday, I'll speak more calmly and give you the answer."

Luan made his senior Brazil debut in a 1-0 friendly victory over Colombia in January - the match played to benefit those affected by the Chapecoense tragedy - having played a key role in the country's Olympic success last year.