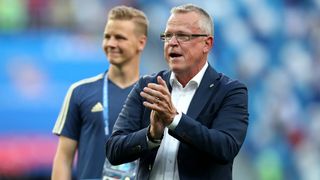 Sweden head coach Janne Andersson insists there was no gloating on the part of his team over Germany's World Cup elimination.

Toni Kroos netted a free-kick deep into stoppage time to snatch a dramatic group-stage win over Sweden in Sochi, with the alleged goading celebrations of Germany's backroom team drawing anger from Andersson's bench.

But it was Sweden who had the last laugh, beating Mexico 3-0 to seal top spot in Group F as the reigning champions subsided to a remarkable 2-0 loss against South Korea.

"I think it's unfortunate for Germany that they were eliminated," Andersson said at a news conference to preview his team's last-16 clash with Switzerland in St Petersburg on Tuesday.

"As far as we're concerned, we don't worry about how other teams were doing. We focus on our own matches, I've been very clear on that point.

"There was absolutely no gloating whatsoever in terms of Germany or any team. There is no joy in somebody else's loss."

Captain Andreas Granqvist, who scored penalties in the group wins over South Korea and Mexico, agreed with his coach's assessment.

"We were very surprised, of course that Germany were eliminated," he said.

"We have every respect for them as the former champions and they were one of my favourites to win it.

"It's unfortunate for them but that happens in tournaments. Some big teams have been eliminated, not just Germany.

"We didn't gloat over that in any way. We are very pleased that we qualified for the knockout stage ourselves."

out at a grey and miserable Krestovsky Stadium. No injury clouds on the horizon for boss Janne Andersson, though. All 23 men present and correct July 2, 2018

Spain were the latest big name to join Germany on the Russia 2018 casualty list as they went down to a penalty shoot-out loss against the hosts in Moscow, while Lionel Messi and Cristiano Ronaldo have seen their respective bids for glory with Argentina and Portugal extinguished.

"It is fascinating to see some of the results, I have to say," Andersson said, with Sweden residing in the seemingly wide-open half of the draw.

"It really shows that the greatest, biggest nations won't win all the time. That, to me, is a source of inspiration if anything.

"But in concrete terms, none of what is happening [elsewhere] is impacting on what we do in any way."