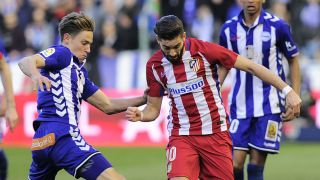 Atletico Madrid coach Diego Simeone has no problem with Yannick Carrasco after the Belgium international reacted angrily to being substituted against Alaves.

Carrasco kicked a water bottle when Simeone replaced him with Fernando Torres in the 62nd minute of Saturday's disappointing 0-0 draw.

The 23-year-old signed a contract extension in October but his form has dipped after an impressive start to the season, his last goals coming against Guijuelo on November 30.

Simeone is unconcerned by Carrasco's show of petulance, which he feels was simply an expression of frustration with himself.

"When they get angry they make me happy. I never worried about that situation. Carrasco was angry with himself," said Simeone.

The Argentine is instead focusing on Wednesday's Copa del Rey semi-final first leg against Barcelona, and, unsurprisingly, he is wary of coming up against the likes of Lionel Messi, Neymar and Luis Suarez after three successive draws.

PRESSROOM : "I can’t imagine a better setting than the Calderón’s for this match"January 31, 2017

Simeone said: "When you have a good game beforehand, you get continuity. We played a good game in Bilbao, normal in Eibar in the Copa and bad against Alaves.

"I do not know how the game will go. We find ourselves against the best opponents in the world and, whoever might be playing, they have three up front who settle 80 per cent of matches."

The topic of video referees has been a persistent theme in Spain since Barca were denied a clear goal in their 1-1 draw with Real Betis on Sunday.

The Atletico boss feels the issue is only being so widely discussed because it involved one of the country's two traditional powerhouses.

"It's always good to have things happen so solutions can be found," said Simeone.

"If it happens to Barcelona and Real Madrid it has the biggest impact. It happens to other teams and the impact is not so great."