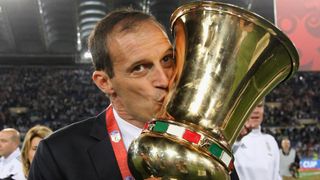 Juventus coach Massimiliano Allegri has admitted the club will take a different approach to the final stages of their pre-season preparations this year.

The Turin side won only three of their opening 10 Serie A games last term, scoring just 11 goals in the process.

Although they ultimately staged a magnificent recovery to secure a league and cup double, Allegri is adamant his side will not leave themselves as much work to do this time around.

"We've now ended the first part of our pre-season preparations without suffering any injuries, which is a good sign," he said.

"Now we're looking forward to regrouping on Tuesday, which will well and truly mark the start of our season.

"We need to show the necessary drive, but also humility, from the off, as we can't take anything for granted.

"We paid the price for that during the first two months of last term.

"We're determined to make sure that doesn't happen again.

"It's important that we put in good groundwork early on so that we can get to March and still be in contention on all three fronts: the Serie A, Champions League and Coppa Italia."

Gonazalo Higuain, Miralem Pjanic and Dani Alves headline a raft of signings made by Juve over the course of the summer and Allegri stressed work will be required for his new-look side to gel.

"This will be an important campaign like every other for this club, because we always aim to achieve all of our objectives," he said.

"We have five new players to bed in to the side, who all have different attributes."

The 48-year-old, however, made no comment regarding Paul Pogba, who is reportedly close completing a return to former club Manchester United.

The French midfielder did not participate in Juve's Asian tour, which saw them secure 2-1 victories over both Tottenham and South China.