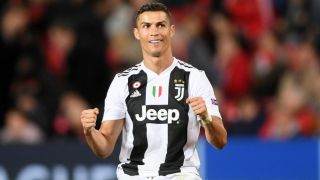 Massimiliano Allegri has no plans to rest Cristiano Ronaldo and has called for Juventus to be more clinical in attack.

Ronaldo has scored five goals in 11 appearances since joining from Real Madrid in a €112million deal and set up Paulo Dybala to score the winner against Manchester United in the Champions League on Tuesday.

That result means Juve have won 11 of their 12 matches in all competitions this season, with the sole blot on their record coming in their most recent Serie A game against Genoa, which finished 1-1.

However, Allegri is concerned enough about their inability to make the most of their chances that he plans to start 33-year-old Ronaldo against Empoli on Saturday, only four days on from their clash with United at Old Trafford.

"Let's take things one step at a time. I can't know what's going to happen in a month. We have two league games and then we have to make sure we get through against United [to the Champions League last 16].

"Our passes must be more precise in the final third because we don't score enough goals for what we produce."

Allegri also warned his players against the sort of complacency that allowed Genoa to snatch a second-half equaliser last week.

"Empoli play good football and control the ball well. They've never lost badly in any game so far," he said. "It could be a tricky game for us if we don't face it in the right way.

"You can't always win in football. Genoa scored from a cross when we fell asleep. We had a good game for 55 minutes and we were punished with our first mistake."

Allegri does plan to give either Joao Cancelo or Alex Sandro a rest on Saturday but will start Giorgio Chiellini if the veteran is fully fit, despite Daniele Rugani waiting to make only his second league appearance of the season.

"One of Cancelo and Alex Sandro could be rested," he said. "Rugani has played little so far and I apologise to him for that, because he will be Juventus' future. If Chiellini is in good condition, he will play."