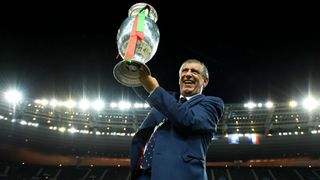 Portugal coach Fernando Santos insists there will be no "revolutions" for his side after the nation won their first international tournament at Euro 2016.

Eder's extra-time winner gave Portugal a 1-0 win over hosts France in the final, with Santos handed a new long-term contract as a reward on Wednesday.

The 61-year-old suggested young players will continue to be incorporated into the side, but denied there will be a large turnover of players after Portugal's victory.

"I have always said that I don't know how to start revolutions," Santos told a media conference on Thursday.

"Renewing the team is a normal and natural process and this national team will continue to be open to all Portuguese players, at home and abroad, no matter how old they are.

Santos said he does not feel pressure in the role and insisted Portugal do not have "extra status" after becoming European Championship winners.

"There is no pressure, only duty," Santos said. "I always give my best. We have responsibilities, but those have not changed.

"Winning the European Championship is just that, we are champions and that's it - it does not give us any extra status.

"I don't make long-term promises. I can only reaffirm that the Portuguese can continue to believe in their national team."

Although Santos has committed his future to Portugal for the next four years, the coach says he has not been set any targets ahead of the 2018 World Cup in Russia.

"No targets were set for me," said Santos. "The president knows how I work and think.

"He knows my goals are always the same: to work even harder to lead Portugal to what every one of us wants. We have a key word from day one which is 'winning' and we are going to keep fighting hard to keep doing that.

"There was no target set when I signed my first contract either; they showed great trust in my work."