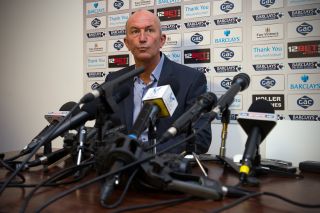 The former Stoke City boss is faced with the challenge of dragging the south London club out of the relegation zone, but was given a timely boost on Saturday as he watched on from the stands as Palace beat Hull City for only their second win of the season.

And, as Pulis prepares to take charge of the team for the first time against Norwich City on Saturday, the Welshman is adopting a cautious approach.

"There are certain things that need to change, but you have to take your time and can't roll everything over at once," he said.

"I'm meeting the chairman for a chat about lots of issues."

One familiar sight on Saturday will be Pulis' trademark baseball cap - an item he wears for superstitious reasons - and he is hoping the new Palace design will bring him good fortune.

Palace are set to be without Yannick Bolasie for the trip to Norwich after the midfielder was sent off last weekend, and Pulis revealed he had been in touch with referees' chief Mike Riley after a Palace appeal against the suspension was turned down.

"I spoke to Mike and he was very open and honest," he added.