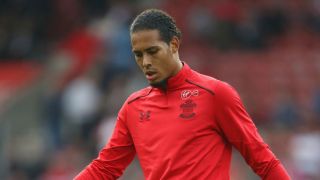 Jurgen Klopp says Virgil van Dijk will not be rushed into making his Liverpool debut with the Reds due to host fierce rivals Everton in the FA Cup on Friday.

Van Dijk moved to Anfield from Southampton for a reported fee of £75million but was ineligible to feature in Monday's 2-1 win at Burnley in the Premier League.

The Netherlands international last played on December 13 - in a 4-1 defeat for the Saints at home to Leicester City - and is raring to get his Liverpool career under way, according to Klopp.

"We made a few tests that make sense only for him and for us, to see where he stands. That's all. There is no rush.

"He is on fire and he really wants it, that's all good, but we have to make sure he can perform.

"Centre-half is a position which depends on all the others on the pitch. There are a few challenges you have to solve by yourself, all the rest is always together. That means you have to tune it so it works really together.

"We need time. A pre-season is for that usually but we don't have a pre-season. Everything will be fine.

"After the Everton game we have a little bit more time, that will help, but it's a long-term project – so it's not important when he makes his first game, it's important how many good games he will play for Liverpool. That's what I'm interested in."

"We made a few tests that make sense only for him and for us, to see where he stands."The boss on when will make debut: January 1, 2018

Philippe Coutinho (thigh) and Mohamed Salah (groin) missed the win at Burnley and Klopp confirmed both are doubts to face Everton in the third-round clash.

The manager also revealed that Salah, along with Sadio Mane, will be permitted to attend the African Player of the Year awards ceremony in Ghana on Thursday, just 24 hours before Liverpool host Everton.

"We have two of the three best African players in our squad. We can sit at home and say they have something to celebrate and we are not interested, but that would not show the respect we have to show in a situation like this," Klopp said.

"They will be ready - or not, if Mo is not ready and it's nothing to do with it [the trip] we can send physios and have everything organised, it's not a problem.

"I know it, I had [Pierre-Emerick] Aubameyang at [Borussia] Dortmund. Auba is the third one [nominee] - oh, I trained all of them, cool!"