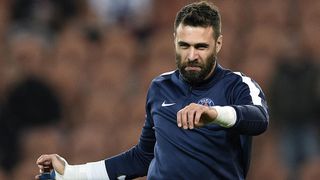 Paris Saint-Germain goalkeeper Salvatore Sirigu insists there have been no offers for his services despite being linked with a move away.

The Italy international has lost his starting place at the Ligue 1 champions to Kevin Trapp, but started in PSG's 2-1 win over Lyon in the Coupe de la Ligue quarter-finals on Wednesday.

While Sirigu has been linked to clubs including Liverpool, the 29-year-old said no serious offers had come in yet.

"I asked my agent to talk to me only if something serious is coming. For now there is nothing," he told reporters.

"I am a PSG player until they kick me out. I stay here. If a team has a big offer, I'll make a decision but I have to think about everything."

Serie A outfit Torino are another club reportedly interested, but Sirigu said his focus was on trying to regain the starting place at PSG.

"I know nothing about Torino," he said.

"I still hope I can be number one. If you are a professional, you train every day to play on Sunday."