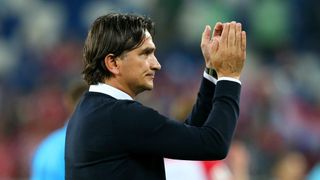 Croatia head coach Zlatko Dalic said his side will not be changing their game when they face Group D favourites Argentina after opening their World Cup campaign with a 2-0 win over Nigeria.

A dour game in Kaliningrad produced a first-half own-goal from Nigeria's Oghenekaro Etebo and Croatia captain Luka Modric added a second from the penalty spot 19 minutes from full-time to ensure Dalic's men moved to the top of the group.

Argentina were held to a 1-1 draw by Iceland earlier in the day and Dalic said he would stick to his guns when Croatia go up against the South Americans on Thursday.

"We will respect all our opponents, particularly Argentina, but we will not adjust to them," he told reporters."We will play our style. We lead the group.

Congratulations!Victory over takes to the top of Group DJune 16, 2018

"We will have some tweaks when we play Argentina but we will not be calculating - we are going to play our game. I said after the draw it would be one of the easiest matches we could play. It will be a joy to play against one of the best teams in the world.

"We will have to play our best game. We have scouted Argentina in our best detail. We put Nigeria behind us, and we will play our style of football however much we respect Argentina."

In the build-up to the game, Croatia's players had shrugged off suggestions that being dubbed the country's 'Golden Generation' put them under pressure, but the team's stars failed to shine against Nigeria.

Despite the subdued nature of the performance, Dalic was satisfied with the outcome.

"A win is a win," he said. "Corners and penalties are part of football. It doesn't matter how you score, it matters that you score.

"We earned our luck. We want to be more efficient in attack but we are not going to split hairs about the way we scored.

"It was a difficult match against an excellent opponent. We were disciplined and we deservedly won."

Dalic reserved special praise for centre-backs Dejan Lovren and Domagoj Vida, who made his starting line-up ahead of Lokomotiv Moscow's Vedran Corluka.

"They played instead of Corluka as they are faster and they deserved their places," said Dalic. They both played well, firm and reliable with no mistakes.

"Corluka is important for us, he did not play because of our style of play, but we start preparations for Argentina tomorrow and will check the condition of the players."