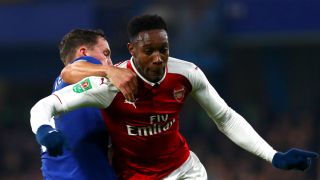 Arsenal forward Danny Welbeck insisted he had no fears of VAR reprisals after being at the centre of a late flashpoint in the goalless EFL Cup semi-final against Chelsea.

Arsene Wenger's side stood firm under second-half pressure at Stamford Bridge to keep the tie all-square for the return at Emirates Stadium in two weeks' time.

The Football Association are continuing their trials with the Video Assistant Referee system during the tie and Welbeck was the cause of a penalty claim in the closing minutes, when he challenged Cesc Fabregas in his own area.

Referee Martin Atkinson asked for the opinion of the video official and it was decided his initial decision of no penalty should stand.

"I didn't know the VAR referral was actually for that incident. I knew I got the ball," Welbeck told Sky Sports afterwards.

"We saw he had somebody in his ear but I got the ball clearly so I didn't mind."

Thanks for your excellent support tonight January 10, 2018

Arsenal and Chelsea played out a scintillating 2-2 draw in the Premier League a week ago in north London but the visitors' displayed defensive discipline on this occasion, producing a similar showing to the league stalemate at Stamford Bridge back in September.

"It's down to the manager, he picks the team and what tactics we use going into each game," Welbeck, who also started the earlier 0-0, added.

"We put in a great defensive performance and we look forward to the second leg."