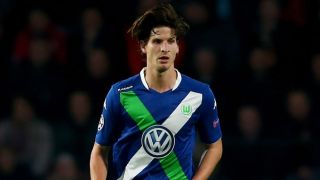 Norwich City have announced the signing of defender Timm Klose from Wolfsburg, subject to clearance.

The Switzerland international defender has agreed a three-and-a-half-year deal after the Bundesliga side accepted an undisclosed fee.

"Timm has got plenty of experience having played in the Bundesliga, in the Champions League and for his country, which will be an asset to us," manager Alex Neil told the club's official website.

"As a player, he's got good technical ability and he's solid in the air. He can also play at either right centre-back or left centre-back.

"We're delighted to have completed this deal and to have added Timm to our squad."

The 27-year-old former Basel youngster says he is realising a dream by moving to England's top flight.

"It was always a dream to play in the Premier League and Norwich have given me a big chance," he said. "Now I want to give everything I can to be a good player in this league.

"When I came here and saw the training ground, the stadium, and everything – it was fantastic."

Klose joins Ivo Pinto and Ben Godfrey in moving to Carrow Road in January, while Matt Jarvis has also made his stay with the club permanent this month.