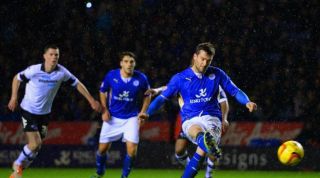 The 29-year-old has spent three campaigns at the King Power Stadium, where he will now remain until June 2016.

Former Portsmouth man Nugent told the club's official website: "I’m delighted to have signed for two years and I’m really looking forward to testing myself with the rest of the squad in the best league in the world.

"Last season was the best of my career in terms of goals and assists, but I wouldn't have managed it without the lads around me so I'm really pleased the squad has been kept together.

"I think we've got a great chance of doing well in the Premier League."

Leicester manager Nigel Pearson said: "David’s contribution to the squad goes a lot further than the goals he scores or the assists he provides.

"He's a striker that works incredibly hard for the team and helps us to set a tempo that other teams found difficult to cope with last season.

"He's a hugely popular, infectious character in the dressing room and a really important part of this group, so I'm delighted that he'll be staying with us in the Premier League."

Leicester are due to play their first match in England's top flight since 2004 at home to Everton on August 16 ahead of a trip to Chelsea the following weekend.