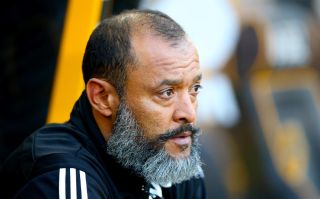 Nuno’s side meet the Serie A outfit at the Stadio Olimpico Grande Torino on Thursday evening in the fist leg of their play-off tie, with referee Artur Dias and his team taking charge.

Like the Wanderers boss, his coaching staff and seven members of the squad, the officials are from Portugal, prompting claims from sections of Italian media that the visitors may enjoy an advantage.

However, Nuno said at his pre-match press conference: “There’s no issue here, come on. Our native language here is English, everyone speaks English to each other.

“Before the game, we never speak about the referee, I think it’s the best way for him to referee normally and not create any pressure.

Both sides finished seventh in their respective leagues last season with Wolves nine points adrift of Manchester United in sixth in their first season back in the top flight and Torino only three worse off than Roma.

The Italians are yet to kick off their domestic season, but have disposed of Hungarians Debrecen and Belarussian side Shakhtyor Soligorsk, scoring 13 goals in the process.

Wolves, who have eased their way past Crusaders of Northern Ireland and Armenia’s Pyunik and found the back of the net 14 times, have drawn with both Leicester and Manchester United in the league.

In the circumstances, Nuno is expecting no quarter to be asked or given in Turin.

“They have a good defence, organisation, strong midfield, good strikers – we have to look at all the team. It’s going to be a very good game tomorrow, for sure.

“[Last season’s] table doesn’t meant much in these moments. What we and Torino did last season isn’t relevant now.”

Wing-back Matt Doherty, who did not re-appear after the break in Monday night’s 1-1 Premier League draw with United because of illness, is fit and in a squad which comprises the 18 men selected for that game, plus defenders Max Kilman and Jesus Vallejo.

There has been little time to prepare for the trip to Italy, but Nuno is convinced his players will be ready.

He said: “We’ve been preparing since the beginning of the season for these kind of cycles. Having three days, it’s difficult, but we are ready to play.

“We’ll decide [the team] tomorrow. We’ll have a strong XI and we’ll compete.”