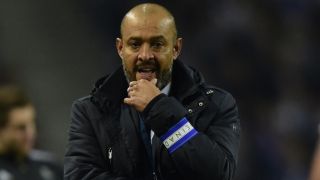 Porto coach Nuno Espirito Santo lamented the red card shown to Alex Telles as he insisted his team can reach the Champions League quarter-finals despite their loss to Juventus.

Telles received two yellow cards in the space of as many minutes to be sent off in the first half of the last-16 first leg at the Estadio do Dragao on Wednesday.

Marko Pjaca and Dani Alves then struck in the second half to seal a 2-0 away win for Juve, putting them in complete control of the tie.

"In the Champions League, the referee could've made a different decision," he told a news conference.

"But this will help us grow as a team."

Despite the two-goal deficit, Nuno remains upbeat about Porto's chances of reaching the quarter-finals with a win in Turin on March 14.

"To avoid being knocked out now will be difficult but nothing is decided yet," Nuno said.