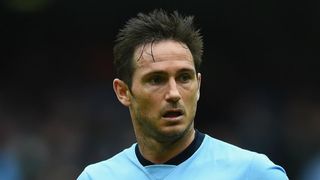 Frank Lampard could not hide his delight after becoming the first New York City player to score a hat-trick in MLS.

Lampard etched his name into the history books after scoring three goals in New York City's 5-1 rout of Colorado Rapids on Saturday.

It has been a long and hard road for Lampard in New York, battling fitness and injury concerns, while attempting to win over fans in the Big Apple.

But the 38-year-old former England international seems to have finally gained the approval of fans after improving his tally to eight goals in eight games.

First hat trick in historyLampard finishes it off from the spot to make it three on the day. July 30, 2016

"I know is very short history but it's a great accolade for me as a person.

"I'm very happy and when I'm playing well, feeling good, obviously I can score goals, I've managed to do since I've been fit.

"To the three goals, personally I feel great but for the team more importantly, twice now in recent weeks we lost a game and come straight back the next week and won. And that's what team who wants to stay on top of the table must do."

Of captaining the team in the absence of regular skipper David Villa, Lampard added: "I mean I'm pleased. Listen David's our captain and does a very good job, not just on the pitch where he scores a lot of goals and leads us from the front but off the pitch.

"I think is important for all the players to show their leadership and been around a long time playing for a long time with great captains and as captain myself at times I tried to use the experience to help today and I think everyone perform well today."