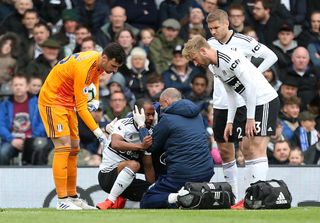 Fulham defender Denis Odoi will sit out the Premier League match against Wolves as part of the concussion protocol, caretaker-manager Scott Parker has confirmed.

Odoi was injured during the first half of last weekend’s 1-0 home win over Cardiff.

The Belgian had stooped to head the ball clear when he took a boot in the face from Fulham team-mate Maxime Le Marchand.

Odoi appeared to have been out cold as he fell to the ground.

Although he initially got back to his feet, the defender then required treatment for eight minutes before eventually being taken off on a stretcher wearing an oxygen mask.

The 30-year-old did not need to be taken to hospital immediately after the incident, but Parker confirmed the club are carefully managing his return to action.

“The only one (missing) is Denis who had a concussion from the weekend. He’s on a protocol now to try and get back for our last game of the season,” Parker said.

“I saw him face plant (into the pitch) and he did look a bit unconscious with the way he fell.

“But the medical team were superb, they were straight onto it to stabilise him and get him off.”

Parker added a press conference reported by the club: “He is all good now, he is fine.

“His wife had a baby as well the other day, so that’s probably given him more of a headache than the concussion.”

Parker’s side have won all three of their matches since relegation back to the Championship was confirmed at the start of April.

Fulham have yet to confirm who will be in charge of the west London club next season.

Parker, though, feels his squad have at least been able to end an overall disappointing campaign with some positives to look back on.

“It’s been a good few weeks, in terms of results and performances,” he said.

“It’s a difficult league to go and win three on the bounce and the players have done very well. We’ve shown the quality we have.”

Parker believes a decision on the manager’s job needs to be made sooner rather than later.

“Now we are three or four weeks from knowing we have been relegated, it is probably best now we really move things forward, how ever way that is,” Parker said, in quotes broadcast by Sky Sports.

“Whether that is me leading this team trying to get back into the Premier League or whether it is somebody else, it is probably better it happens a bit quicker than later.”

Parker replaced Claudio Ranieri at the end of February.

“I have loved every minute of it since I have been in this position,” the former England midfielder added.

“Ultimately I want to become a top manager – that is my ambition. I am hoping that at this present moment in time it is at this football club.

“That is leading this football club, preparing and building this team here which can get us to back into this division.

“That are my thoughts, but at the same time it is out of my control. I want to be a manager and I want to be that manager, but we will see where it leads.”