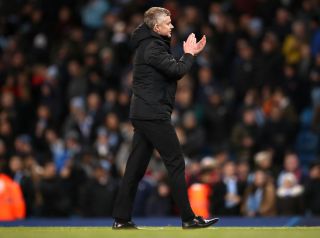 Ole Gunnar Solskjaer spoke of his pride after his Manchester United side fell short of a remarkable comeback in their Carabao Cup semi-final against Manchester City.

Nemanja Matic scored the only goal as United beat City 1-0 at the Etihad Stadium – their second victory at that venue in less than two months – but it was not enough to turn the tie around.

Holders City, who dominated both legs in terms of chances created, prevented further damage and profited from Matic’s sending off to win 3-2 on aggregate and book a Wembley date with Aston Villa.

After United were outplayed in the first leg, United manager Solskjaer felt it represented a fine turnaround.

The Norwegian said: “I want to talk about the players and the attitude they’re showing, and how far they’ve come. They’ve come here twice now in six weeks and beaten Man City.

“It’s difficult enough to beat them twice in 10 years and we’ve beaten them twice in six weeks. It was fantastic attitude, they gave absolutely everything.

🗣️ "It was a fantastic effort from the boys – they're giving us absolutely everything."— Manchester United (@ManUtd) January 29, 2020

Solskjaer added: “We know it’s going to be inconsistent this season while we’re building, but it shows how good we can be and how good these boys can become.

“We want to eradicate those defeats but everyone watching knows what we’re trying to do.”

Solskjaer was frustrated by Matic’s dismissal for a second yellow card 14 minutes from time.

He said: “The first one’s not a yellow card. He’s unlucky. I disagree with that decision.

“We had a chance towards the end but of course that made it more difficult.”

Yet while United were resilient, it was another game dominated by City. The hosts squandered a number of gilt-edged chances and had 13 shots to United’s six.

They held on and will now have a chance to win the competition for a third year in succession and a fifth time in seven seasons.

Manager Pep Guardiola said: “We played an incredible top side with physicality. We created enough chances to score goals and in knockout games that is the difference.

“In the end we conceded, as usual, so few chances and their goal was from a set-piece. The first time they shot on target they scored. In the second half they shot once, no more than that.

PEP 💬 We played a side with incredible physicality. The goal was from a set piece. The first time they shot on target.— Manchester City (@ManCity) January 29, 2020

“I am really pleased with this 180 minutes we played. In both games we were better and I am so satisfied with the players and the way they played.

“I am very pleased, for three years in a row, to be in this final.”

City have been unable to keep pace with Liverpool in the Premier League this season but Guardiola felt reaching Wembley again showed complacency had not set in.

He said: “When people say we are complacent about what we have won, (if that is true) you don’t try to dis the more humble competition of the season, you are not able to do it three years in a row.

“Normally when you have won a lot (people say) this competition doesn’t matter, but in my teams that never happens.”