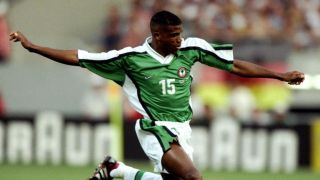 Sunday Oliseh has been appointed as the new head coach of Nigeria.

Former Nigeria captain Oliseh, who won 63 caps for his country and played his part in the Africa Cup of Nations success in 1994, was confirmed as Stephen Keshi's replacement on Wednesday.

Oliseh, whose previous coaching experience came with Belgian side Vervietois between 2008 and 2009, will now attempt to lead Nigeria to the Africa Cup of Nations in 2017 after they missed out on the most recent staging of the competition.

NFF general secretary Dr. Mohammed Sanusi said: "There is no time to waste. The team has important matches to prosecute in the next few weeks and it is imperative that Oliseh starts work immediately."

Nigeria currently sit second in Group G of AFCON qualification with a trip to Tanzania next up for Oliseh's men in September.