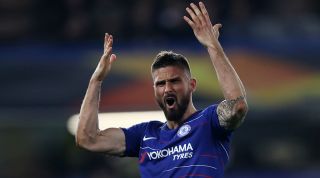 Giroud has struggled to hold down a first XI spot at Stamford Bridge since arriving in January 2018, but believes is never too late.

Academy graduate Tammy Abraham has taken the plaudits with a pair of braces this season against Norwich and Sheffield United respectively.

And while it's likely that Frank Lampard will stick with the 22-year-old, Giroud – who is still being selected for the French national team – has reiterated that he won't just settle for second best.

When posed the questioin of whether Abraham would keep the 32-year-old Frenchman on the bench, Giroud replied bullishly.

"Obviously not! I have goals in my head," he told Le Figaro.

"I'm here to help the new generation, but the retirement time has not come.

"I’m still hungry and have a lot of ambition. I don’t want to be Chelsea’s No.2 striker, for sure.

"Just because I’m here as an older brother for young people, it doesn’t mean I’m out on the sidelines."

Giroud has played 101 minutes so far this season without troubling the scoresheet.