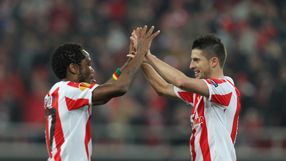 "The HFF has accepted the punishment handed down by the Super League," it declared in a statement.

Panathinaikos will also start the 2012/13 season with two points deducted as part of the toughest sanctions ever imposed by the Greek Super League.

The strict penalties followed a new sports law passed by the government in February to clamp down on football violence.

Olympiakos led the standings by four points from Panathinaikos before Wednesday's hearing rubber-stamped the punishment handed out to Panathinaikos on March 23rd and confirmed the Piraeus side had won their 39th league title.

Panathinaikos did manage to get part of their penalty reduced on appeal with the Athens club ordered to play three matches behind closed doors instead of four, while their fine was slightly reduced to 212,000 euros from 252,500.

The violence during the heated atmosphere at the Athens derby at the Olympic Stadium, the ground which hosted the 2004 Olympics, was some of the worst seen in recent seasons.

The start of the second half was delayed by 45 minutes as fans pelted police with Molotov cocktails, flares and missiles, and the game was subsequently abandoned altogether with nine minutes remaining with Olympiakos 1-0 ahead.

Twenty police officers were injured and more than 50 arrests were made while three fire engines were called in to extinguish flames as hundreds of fans set alight sections of the stands. Three of those arrested were charged with possession of explosives, police said.

The club had already been in trouble with the Super League's disciplinary committee this season for crowd violence and were forced to play one match behind closed doors earlier this month.