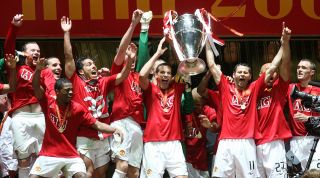 After Sir Matt Busby’s men comprehensively beat Benfica 4-1 in 1968, it took the most remarkable of comebacks to overcome Bayern Munich 2-1 in 1999 as Ferguson lifted the Champions League for the first time.

There was similar drama as United won their third European Cup on this day in 2008 against Chelsea, with the ever first all-English final going down to football’s version of Russian roulette.

The opening 25 minutes at the Luzhniki Stadium failed to live up to the pre-match hype, but Cristiano Ronaldo’s header – his 42nd goal of the season – injected life into the showdown.

United had further chances but the Blues bounced back thanks to a massive slice of luck just before the break, with Frank Lampard tucking home after Michael Essien’s 25-yard shot took two deflections.

Avram Grant’s men kicked on in the second half and Didier Drogba hit the woodwork, but the match went into extra-time and the goal frame was again rattled as Lampard took aim shortly after the restart.

Terry cleared a goalbound effort from Ryan Giggs off the line before Drogba was sensationally sent off for slapping Nemanja Vidic as tempers frayed in the closing stages. The match ended in the tensest of shootouts.

The Portugal international’s devastation turned to almighty relief with the match-deciding spot-kick at 4-4, when Blues skipper Terry slipped and sent the ball onto outside of the post in the Russian rain.

Into sudden death, Van der Sar was the hero as he saved Nicolas Anelka’s kick, as United triumphed 6-5 on penalties, sparking wild celebrations from all clad in red.

Ferguson said the team, who were led up to receive the European Cup by Sir Bobby Charlton, were inspired by the prospect of winning the trophy 50 years after the Munich air disaster.

“We had a cause which was very important,” he said. “People with causes are difficult to battle against and I think fate was playing its part today. I feel very, very proud.

“The slip by Terry gave us an opening and I thought we would win it then.

“It was tight and there were some fantastic moments.”

United have not lifted the Champions League since, having lost in the final to Barcelona in both 2009 and 2011.

Chelsea would go on to win the trophy for the first time in their history in 2012, when the penalty shootout went their way against Bayern Munich.