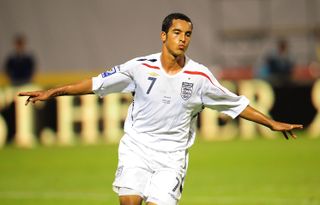 Teenager Theo Walcott became the youngest player to score an England hat-trick on this day in 2008.

The 19-year-old claimed his first international goals as Fabio Capello’s rampant side stunned Croatia with a 4-1 win in World Cup qualifying.

During a memorable evening in Zagreb, Arsenal forward Walcott registered England’s first competitive treble since Michael Owen bagged three against Germany in the 5-1 win in Munich in 2001.

Manager Capello said: “He is young and so dangerous for defenders. He is one of the most important young players in England. At this moment, he is difficult to contain.”

Let's throwback to the last time the #ThreeLions visited Croatia – and a special day for @theowalcott… 😀#TBTpic.twitter.com/4D1fHlcTYq— England (@England) October 11, 2018

Walcott, keeping former captain David Beckham out of the side, drilled the dominant visitors into a half-time lead, before doubling the advantage with a carbon-copy second just before the hour mark.

Wayne Rooney added a third and, after Croatia – who had Robert Kovac sent off at 1-0 – pulled one back through Mario Mandzukic, Walcott had the final say, racing clear to slot home with eight minutes remaining.

Walcott, a shock selection for the 2006 World Cup by Sven-Goran Eriksson, was left out of Capello’s 2010 squad and has never made a World Cup appearance.

The 31-year-old Everton man won the last of his 47 international caps in a friendly against Spain in November 2016.