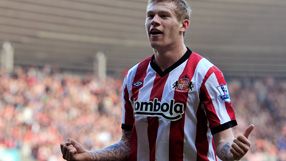 Both players are targets of speculation with Manchester United being linked with the signature of McClean, while Arsenal and PSG are reported to be tracking Sessegnon.

Since making his debut in December, McClean, pictured, has registered 19 appearances in all competitions, scoring five goals, and has cemented his place on the left side of midfield. Sessegnon meanwhile, has been in equally imperious form, having scored seven times in 27 games, providing a further nine assists.

However, O’Neill is adamant he is building a squad capable of competing in the Premier League, not destroying one. McClean has recently penned a three-year deal, while Sessegnon still has two years left to run on his current contract.

"I haven't any cause to be overly concerned, primarily because I haven't given it any thought," O'Neill told The Shields Gazette.

"But these are the type of players we need to keep at the football club.

"If we are going to progress, these are the players the fans want to see, the likes of (James) McClean and (Stephane) Sessegnon who both belong to us.

"We've just given a new contract to James who is worth every single penny out of it, there's no question about that. His attitude has not changed one drop.”

O’Neill took the step of saying the young Irishman has a guaranteed place in the starting XI provided he keeps up his current form.

"If I was advising him, his immediate future has to be at our football club. He's going to play pretty often at the moment.

"I would love to be able to say to him that his place is in jeopardy. But he holds that place on merit at the moment, and he's still just learning the game.

On the subject of Sessegnon, who has been converted from a midfielder to a role higher up the pitch, O’Neill added: "Sessegnon is a bit older, and I think he has improved.

"He's a very accomplished player in a lot of positions, but we've given him a position where he can work wonders for us.

"He's enjoying his football, and we'll do everything we can to keep him at the club.

"I think he is happy in the way he's playing, but he's obviously going to attract attention from major football clubs in the European scene."

Sunderland will hope to keep hold of both players who have proved invaluable to the club’s run of excellent form this season that has seen them climb to ninth place in the Premier League.