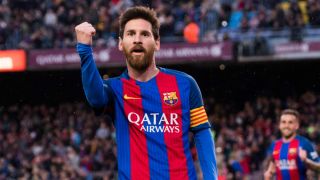 Lionel Messi can only be stopped by "snipers from the stands", Quique Setien joked as Las Palmas prepare to host Barcelona.

Stopping five-time Ballon d'Or winner Messi is arguably the hardest task in LaLiga and football, with Barca's all-time leading goalscorer continuing to spearhead the club's bid for a LaLiga three-peat.

Messi has scored a league-high 35 goals this season, while the 29-year-old has 51 in all competitions.

Asked how to stop Messi and Barcelona – who are level on points with Real Madrid atop the table – Las Palmas head coach Setien told reporters: "With a few snipers from the stand.

"When these players are in their best form they are unstoppable, and when they are together, Messi, Neymar and [Luis] Suarez multiply their effectiveness and no one can stop them.

"Let's see if they fall asleep a little during the game, which is the only thing we can really hope for."

Sunday's clash will be Setien's final match at Estadio Gran Canaria ahead of his departure at season's end.

Differences with the Las Palmas board have led to Setien's impending exit and the 58-year-old said: "I know that Barcelona are fighting for the league, but to me nothing would be more satisfying than giving our fans a bit of joy.

"I would finish happy if we can win or get a draw off the back of a good performance. For me it is a special game, I would like the team to win.

"The reality is, and I accept that, some fans do not consider that I have done my work as I should, and I will take this criticism with humility. I will always remember this island.

"I leave with the recognition of the vast majority and the satisfaction that the team has played well to achieve things that many years ago this club were incapable of, and that's what I will remember."

Las Palmas are 14th in LaLiga, 12 points clear of the relegation zone with two matches remaining.