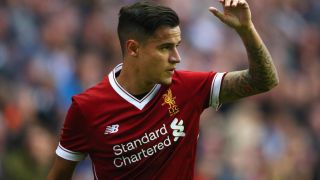 Liverpool will not win the Premier League or Champions League this season regardless of whether they keep Philippe Coutinho, according to club icon Graeme Souness.

Coutinho is being heavily linked with Barcelona, who are seeking a replacement for Neymar after the forward's world-record €222million move to Paris Saint-Germain.

Souness feels the attacking midfielder is likely to leave Anfield, but cannot see Jurgen Klopp's side challenging for one of this season's biggest two trophies even if they keep the 25-year-old.

"I think Klopp needs to make sure Liverpool challenge for the Premier League next season," Souness, a former Reds player and manager, told Sky Sports.

"I think that - alongside a run into the latter stages of the Champions League and one of the domestic cups - would be a good season for him.

"But I can't see them winning the Champions League or the Premier League, with or without Coutinho."

Souness believes the timing of the Coutinho saga has left Klopp in a sticky situation, with Liverpool set to open their Premier League season away at Watford on Saturday, with the crucial Champions League play-off tie against Hoffenheim to follow.

He added: "I don't think he [Klopp] has made enough signings to challenge in the big two competitions next season.

"And if they lose Philippe Coutinho, they'll get an enormous figure for him, but at this point of the window, they'll probably end up spending a lot of money on someone they are not sure about to replace him.

"They have to fight to try and keep the player but ultimately the player will decide and for a Latin-American player, Barcelona will always be the place to go."