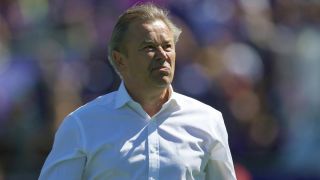 With just two wins in 12 matches, Orlando decided to part ways with the 55-year-old, who had been with the club since their foundation in Austin, Texas in 2008.

Heath led Orlando City to two USL Championships and three USL regular-season titles, before guiding the team to within five points of the play-offs in their first MLS campaign in 2015.

"It is always a very difficult decision to part ways with a head coach and not one that the board of directors has taken lightly. It is even more difficult when that coach has been instrumental in the growth of the club since its inception over eight years ago. Adrian has served this club with passion and enthusiasm," said Orlando president Phil Rawlins.

"While our successes together are undoubtable, we believe the renewed energy this change will bring will be uplifting for the team.

"We feel that the time has come for us to move on with our future in MLS. We continue to remain very excited about the growth of our club."

Despite boasting Kaka, Julio Baptista and Antonio Nocerino in their squad, Orlando City are seventh in the 10-team Eastern Conference, adrift of the play-off spots on games won as they prepare to face Houston Dynamo on Friday.