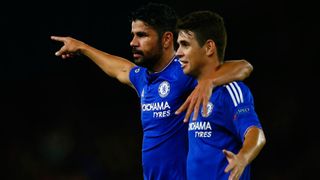 Chelsea midfielder Oscar has denied he was involved in a training-ground bust-up with Diego Costa.

Reports claimed the duo had to be separated by shocked team-mates after an altercation on Thursday, which was prompted by a heavy challenge from the Brazil international.

"For those saying that I and Diego Costa had a fight today in training is lying, he's one of my best friends and we would never fight," he wrote on his official Twitter account.

It was suggested that Oscar had reacted to an earlier tackle by Costa with a studs-up challenge of his own, with one source quoted in The Daily Telegraph describing it as "outrageous".

Chelsea host Scunthorpe United in the FA Cup third round on Sunday.