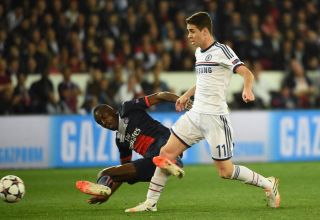 The Brazil midfielder has been a regular starter for Jose Mourinho during his first season back at Stamford Bridge, with the Portuguese stating that PSG would have no chance of signing him and winger Oscar if Financial Fair Play rules are enforced.

Both have been linked with moves to the French champions and Oscar said he discussed a switch to the Parc des Princes with Brazil team-mates Lucas Moura and Thiago Silva during one of the recent UEFA Champions League quarter-final between the sides.

The 22-year-old has welcomed PSG's interest in him, but he is not looking to leave Stamford Bridge.

"Lucas, Thiago Silva and I spoke about it a little bit when we met in the Champions League, but there is nothing certain.

"They know that I'm good at Chelsea."