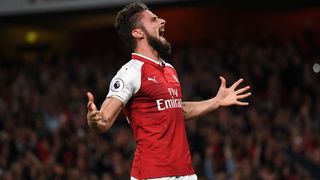 Arsenal striker Olivier Giroud admits he came close to leaving the club in the transfer window before a discussion with family and Arsene Wenger changed his mind.

The 30-year-old stated last month that he would be staying at Emirates Stadium despite the club-record arrival of Alexandre Lacazette prompting rumours that he could return to Ligue 1.

Giroud says he seriously considered calling time on his career with the Gunners but felt he had more to offer the club in their pursuit of silverware.

"It's true I was close to leaving the club," he told a news conference ahead of Thursday's Europa League match with Cologne. "I said I wanted to play but after big reflection with everybody around me like my family and close friends in a supportive way I decided I wanted to stay at Arsenal.

"I thought the story was not finished at Arsenal. The club has brought me a lot and I want to give it back, improve and win more trophies. I said to the boss 'our story is not finished'."

Giroud is now focused on reaching 100 goals for the club as soon as possible after scoring his 99th in the 4-3 Premier League win over Leicester City on the opening day of the season.

"It's a privilege for me to play for Arsenal and to score almost a hundred goals," he said. "I hope it happens as quickly as it can. For a striker, it's important to score.

"I keep it in a part of my mind but most important for me is to win. After, the goals will come if we play well and win our games."

Compatriot Mathieu Debuchy was another who came close to leaving Arsenal during the transfer window, with Marseille, Nice and Brighton and Hove Albion among those linked with his signature.

The 32-year-old defender admits he is enduring a difficult time in north London, having failed to secure an exit despite being frozen out of the first-team picture.

"These are not easy times," he told L'Equipe. "I wanted to find an exit door but, sadly, it was not possible.

"There was a possibility with Nice, they came to me but it didn't happen. The manager would have let me leave this summer for free. Brighton enquired in the final days of the window, but a deal did not come about...

"I train with the pros during the week and I play with the kids at the weekend. I am not the future of the club... I have proved my worth."