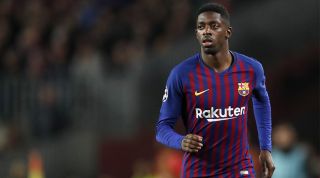 German newspaper Bild are reporting that Bayern Munich are interested in bringing Ousmane Dembele back to Germany from Barcelona.

Dembele was one of the hottest properties in world football at Borussia Dortmund, leading to his huge £135.5m move to Barcelona in 2017.

However, it's not all been plain sailing since. Niggling injuries have been a reccurring concern for the Frenchman, plus concerns about his lifestyle in Catalonia.

Dembele has also been criticised for turning up late to training and eating fast food.

As a result, Bayern clearly see him as a potential option, and though their primary target this summer is Manchester City's Leroy Sane, they have earmarked Dembele as Plan B.

Any move for Dembele could be contingent on Neymar, who is rumoured to be weighing up a return to Barcelona.

However, with Barcelona president Josep Maria Bartomeu saying earlier this year that Dembele is a "much better player" than Neymar, could we be seeing both of them line up together next season?

British players who have moved to the Bundesliga

Andy Mitten column: When my Dad berated Andy Cole - and why we cycled from the Camp Nou to Old Trafford