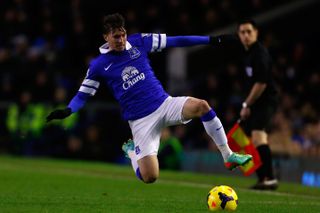 A left-sided player, Oviedo was deployed in an unfamiliar position in the 1-1 draw at The Hawthorns.

However, the Costa Rica international has revealed he was comfortable with his new role on the right flank.

He told Everton's official website: "I'm happy to play games. To play as a right winger, for me, is a good position, because I can have many chances to get in on goal.

"I had two good chances against West Brom, but unfortunately sometimes it's difficult (to score)."

Everton missed out on the opportunity to return to the Premier League's top four when giving up a lead at West Brom.

Next up for Martinez's men is an FA Cup trip to League One outfit Stevenage, before a crucial Merseyside derby against Liverpool, who currently sit fourth, on January 28.

"We are disappointed with the draw (against West Brom) because we had many chances in the first half and we need to score those to win important games," Oviedo added.

"We wanted to get back into the top four, so we are disappointed.

"We need to work for the next game now because it's very important for us to win in the next cup game and also at Anfield next week."