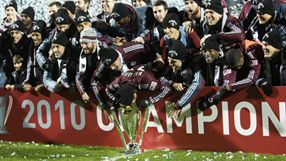 The own goal provided a fitting finish to largely scrappy final that was played outside the United States for the first time.

"Soccer is a cruel game," Dallas coach Schellas Hyndman told reporters. "You play for 90 plus minutes and it's a game of inches, it's a deflection goal, it goes in and you say, 'how did that happen?'

"Then you have good chances you don't put in and you say, 'how did that happen?'

While the temperature at kick-off was a brisk 45 Fahrenheit (7 degrees Centigrade), the rain and freezing conditions that had been forecast never appeared.

But by the time Colorado was celebrating the winner, most of the capacity crowd of 21,700 had gone home, leaving only a few hearty supporters behind at BMO Field to watch the Rapids lift their first MLS Cup.

"I don't mind how they come, if they are winners it doesn't matter," said Rapids coach Gary Smith when asked if he minded winning the championship on an own goal.

"I think the over-riding thought has to be in order for somebody to score an own goal there must be some pressure to make that mistake.

"You don't get too many volley one in from 40 yards unopposed. I'm just pleased the guys were able to mount enough of an attack in the extra-time to make the difference."

Dallas took the lead in the 35th minute with a well-worked goal when Colombian international David Ferreira, voted the league's most valuable player on Friday, coolly converted a superb cross from Marvin Chavez.

Colorado drew level through a scrambled effort in the 57th minute from striker Conor Casey, who scooped the ball home while lying on the ground.

Casey, who tormented the Dallas backline all night with his aggressive runs, was named man of the match.

"We have a hard, hard working crew. It's been a battle all year and we just kept battling it out.