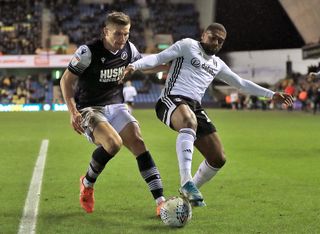 Wigan edged a scrappy Sky Bet Championship encounter against Millwall at the DW Stadium thanks to an own goal by Shaun Hutchinson just before the hour mark.

The defender turned Anthony Pilkington’s cross into his own net for the only goal of a lively and sometimes controversial encounter.

Both sides had cause for concern inside the opening minute, when Wigan skipper Sam Morsy was caught late by the studs of Millwall midfielder Jed Wallace.

Thankfully for Wigan, the Egypt international was okay to continue after treatment – while Millwall would have been relieved to see Wallace receive only a yellow card.

The home side threatened with a deep cross from Pilkington, which was only just in front of a stretching Kieffer Moore.

A good move from Millwall got Mahlon Romeo away at the other end, only for Joe Williams to get a foot on the cross.

Millwall had a shout for a penalty when Ryan Woods was taken out by Nathan Byrne right on the edge of the area. Referee Jeremy Simpson awarded a free-kick but replays seemed to suggest the contact was inside.

The free-kick was straight down the throat of David Marshall, and Wigan had another let-off when a great cross from Jed Wallace saw Jon Dadi Bodvarsson make a mess of a header at the far post.

The second half continued in the same vein, with Wigan riding their luck.

Marshall dropped a routine corner right at the feet of Tom Bradshaw six yards from goal but with the whole of an unguarded net to aim for, the Millwall striker somehow steered his shot wide.

And Wigan immediately almost took advantage, with a shot from Pilkington deflecting off a defender and looping agonisingly wide of the far post.

There was controversy as Williams looked to handle on the edge of the Millwall box, only to be allowed to get his shot in, which clearly hit the hand of a defender. The official ignored both and play went on.

Simpson was also unmoved when Murray Wallace, who had been booked, went in late on Williams, with the Wigan players baying for a red card.

But Wigan got their own revenge when they went ahead 12 minutes after the restart. Good work from Jamal Lowe found Pilkington, whose cross-shot was helped home by a helpless Hutchinson.

With Wigan’s tails up, Pilkington then sent in a free-kick from 30 yards which was brilliantly saved by Bartosz Bialkowski. From the corner, a scramble resulted in Leon Balogun steering his shot just wide.

Try as they might, Millwall were unable to force a late leveller, with the Wigan defence holding on for a rare clean sheet – and a very welcome three points.