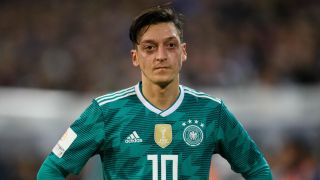 Arsenal star Mesut Ozil has broken his silence on the controversial meeting with Turkish president Recep Tayyip Erdogan that prompted a fierce backlash in Germany.

Ozil and international team-mate Ilkay Gundogan were pictured at the London Embassy in May alongside Erdogan, who was re-elected days later despite protests over his government's alleged systematic arrest of journalists, civil rights activists and political opponents.

The two midfielders, who were both born in Gelsenkirchen but share Turkish heritage, were subsequently booed by Germany fans in pre-World Cup friendlies, with the uproar cited as a reason for the nation's poor performance in Russia.

Gundogan later insisted there was no political motivation behind the meeting and Ozil, having remained quiet on the issue until now, has similarly defended his actions.

"I'm aware that the picture of us caused a huge response in the German media, and whilst some people may accuse me of lying or being deceitful, the picture we took had no political intentions," he wrote in a statement.

"For me, having a picture with President Erdogan wasn't about politics or elections, it was about me respecting the highest office of my family's country.

"Although the German media have portrayed something different, the truth is that not meeting with the President would have been disrespecting the roots of my ancestors, who I know would be proud of where I am today."

The past couple of weeks have given me time to reflect, and time to think over the events of the last few months. Consequently, I want to share my thoughts and feelings about what has happened. July 22, 2018

The former Real Madrid man went on to note that Queen Elizabeth II and British prime minister Theresa May had likewise met with Erdogan, adding: "Whether it had been the Turkish or the German President, my actions would've been no different.

"I get that this may be difficult to understand, as in most cases the political leader cannot be thought of as being separate from the person. But in this case, it is different.

"Whatever the outcome would've been in the previous election, or the election before that, I would have still taken the picture."