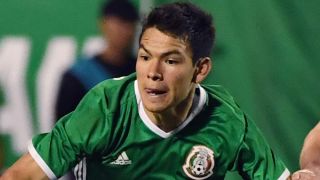 Hirving Lozano helped Pachuca book their spot in the CONCACAF Champions League final with a thrilling 3-1 win over Dallas in their second leg on Tuesday.

Lozano, previously linked with a move to Manchester United, struck twice late on to seal a 4-3 aggregate win for the Mexican side.

The victory moved them into a fifth Champions League final and first since 2010, the fourth and last time they were crowned champions.

Trailing 2-1 on aggregate, hosts Pachuca struck first at Estadio Hidalgo through Franco Jara, who headed in a Jonathan Urretaviscaya cross from close range in the 38th minute.

Lozano appeared to have settled the tie in the 80th minute, skipping between two markers and inside from the left before beating goalkeeper Chris Seitz from 25 yards.

But Dallas fought back and struck six minutes later through Cristian Colman, who headed in a scrappy goal as the tie looked headed for extra time.

However, Lozano was the hero for Diego Alonso's team in the second minute of additional time.

With just seconds remaining, the Mexico international clipped in a cross from the left which evaded everyone and found the bottom corner.

Awaiting Pachuca in the decider are Tigres UANL or Vancouver Whitecaps, with the Mexican side leading the tie 2-0.