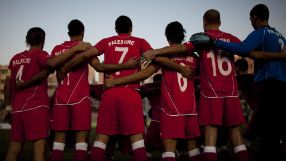 The fixture was viewed by Palestinians as another symbolic step towards confirming their credentials for the state they intend to establish in the Israeli-occupied West Bank and the Gaza Strip.

"This is another occasion on which we can show we are a state, every time I come here it makes me proud," Palestinian Prime Minister Salam Fayyad told Reuters at the Faisal Husseini stadium.

Jibril Rajoub, chairman of the Palestine Football Association, said it had been a historic day.

"From now on Palestine will always have to play in their homeland, no more matches in foreign countries," he told Reuters.

Until October 2008, when they hosted Jordan in a friendly international at Al-Ram, Palestineplayed all their matches abroad because football's world governing body FIFA deemed the Palestinian territories unsafe to host visiting teams.

The Palestinian league was also re-launched in 2008 following an improvement in the security situation.

Asian Football Confederation president, Mohammed Bin Hammam, a possible rival to Sepp Blatter in upcoming elections for the FIFA presidency who was guest of honour at the match said it could be a precursor for more sporting events.

"I am very proud to see for the first time an official match... but we should all focus on the fact that we can build bridges with sport to build bridges between the peoples of this area," he told Reuters.

The match finished 1-0 to the hosts after extra time, the same scoreline as the first leg won by Thailand in Bangkok on February 23.

Abdulhamid Abuhabib scored Palestine's goal with a spectacular volley from the edge of the area in the 43rd minute and they had at least two other good chances to score on the fast, artificial pitch that made ball control difficult.

Abuhabib's goal sent the 16,450 fans into wild celebrations in cold, wet conditions but it appeared to get the better of both the fans and the players as the match went to penalties.

Thailand were reduced to 10 men when defender Theerathon was shown a second yellow card by Qatari referee Banjar al-Doari in the 68th minute but the Palestinians could not capitalise even though they dominated most of the play.