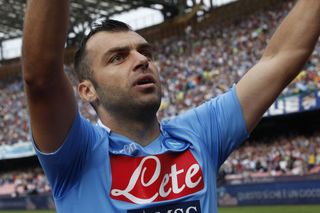 The Macedonian played for Roma's fierce rivals Lazio for six seasons and admitted he would love to inflict a first league defeat on them under Rudi Garcia.

Napoli have also started the season unbeaten but have drawn one of their seven matches, leaving them two points behind the early leaders.

Pandev has scored three goals in his last two league appearances for Rafael Benitez's side and he hopes to reproduce that form on Friday.

"Playing against Roma does feel like a derby for me, as I was at Lazio for five and a half years," he told Il Messaggero newspaper.

"I dream of scoring against my old Napoli team-mate [Roma goalkeeper] Morgan De Sanctis, but it's the performance of the whole team that is important.

"I didn't expect Roma to be top of the table with a 100 per cent record after seven rounds, but they have a squad capable of fighting until the end, just like Napoli."

The encounter between the top two was brought forward to avoid clashing with a planned protest in the Italian capital on Saturday.