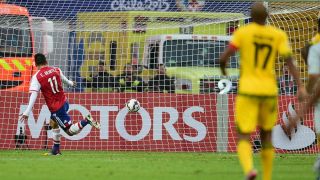 Paraguay were convincing 1-0 winners over Jamaica in Antofagasta on Tuesday, continuing their Copa America momentum.

Quarter-finals are all but a formality now for Paraguay, who have reached the Copa's last eight in seven of the previous eight tournaments - surpassing the stage only once, when they made the final in 2011.

The victory saw Paraguay carry on their form from their 2-2 draw with Argentina, while for Jamaica, it was another 1-0 defeat after their opening loss to Uruguay.

Kerr rushed out of his area to deal with a lofted ball through from Victor Caceres, the Norway-based custodian opting to use his head to do so.

However, Kerr's header went straight at the awaiting Edgar Benitez - the ball coming off the Paraguayan's thigh and deflecting back into the unguarded net.

It was no more than Ramon Diaz's men deserved, as they had broken down the Jamaican defence on numerous occasions after the underdogs were resilient in the early stages.

Roque Santa Cruz had three on-target strikes in the first half alone, the number nine's best effort coming in the 32nd minute when he forced a reflex save from Kerr with a stunning volley from 20 yards out.

Bobadilla and Benitez first caused some trouble for Jamaica's defence in the 27th minute, the latter almost through on goal after Bobadilla brought down Miguel Samudio's delightful long ball to the point of the area.

Moments later, Samudio was in the thick of the action again - his low ball from the left byline eluding Kerr, before Kemar Lawrence was able to clear with Santa Cruz lurking.

Eventually, the dam wall would break via Kerr's misplaced header - and Paraguay were deserved leaders at half-time.

Pablo Aguilar's header back across goal found Caceres at the far post early in the second half, and while the midfielder volleyed past Kerr - the goal was ruled out for offside.

Caceres went on a winding run moments later, finishing with a lashing strike, which was parried behind the posts by Kerr as Paraguay threatened to kill off the contest.

Samudio very nearly did just that on the hour mark.

In acres of space, the left winger charged forward from his own half, played a one-two pass with Bobadilla, before curling a left-foot strike on goal - which hit the crossbar flush.

Garath McCleary tried to inspire Jamaica, weaving his way to the edge of the area with a classy run, but was still unable to get a shot off - before a ball back into the area saw Lawrence challenge Paraguay goalkeeper Antony Silva illegally.

Simon Dawkins was lucky to stay on the pitch, after a studs-up challenge on Caceres in the 67th minute - and referee Carlos Vera sought to send one of Winfried Schafer's assistants to the stands as a result.

Paraguay should have had a penalty inside the final 20 minutes, with Jamaica defender Adrian Mariappa blocking a Santa Cruz header with his raised arm - but Vera was unsighted.

McCleary fired a bullet from range that just evaded Silva's right post in what would have been a stunning equaliser with 10 minutes to play.