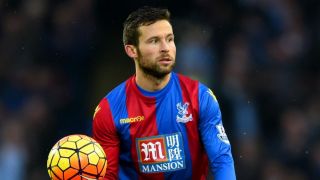 Cabaye was felled by Ireland shortly before half-time in the fourth-round match at Selhurst Park on Saturday but Clattenburg elected to wave play on, with Xherdan Shaqiri going on to fire just over for the visitors.

The French midfielder was substituted at half-time and, while Pardew is hopeful the ankle injury is not too serious, the former Newcastle United boss thinks Clattenburg made an error.

"I thought Mark got that particular decision wrong, because he came in from the side on Yohan and his ankle is swollen," Pardew told reporters.

"We'll have to wait and see if there's permanent damage. We couldn't get treatment to him because the game went on.

"But it was a tough game to referee and there were two committed Premier League sides out there today."

Wilfried Zaha scored Palace's winner after 17 minutes, sending them into the fifth round, and Pardew was full of praise for the winger, who was a constant thorn in Stoke's side on Saturday.

"We created problems elsewhere to give him the space to play well today and he got us a great goal," he added.

"Because the rest of the attacking players were all causing problems, it allowed Wilfred to have a bit more room.

"He and their defenders have had terrific battles and that shows you how well Wilf played – we can take that into Tuesday against AFC Bournemouth because it's a big game."