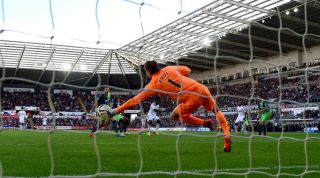 With Pardew's position continuing to be the subject of speculation after a poor start to the campaign, Krul was in fine form at the Liberty Stadium.

The Netherlands international made a number of smart saves, including one from Wilfried Bony shortly before Papiss Cisse drew the visitors level for a second time.

Pardew felt the save should rank among the best of Krul's career.

"Bony's connected with a fantastic cross and he's had to make a brilliant save." the Newcastle boss told the club's official website.

"It'll probably go in Tim's top five, I should think, because it was that good.

"[He was] going back the wrong way, weight going all the wrong way and to be able to reach that was a big lift for him."

Krul is in the Netherlands squad for Euro 2016 qualifiers against Kazakhstan and Iceland, but his Newcastle team-mate Daryl Janmaat has withdrawn due to a hamstring problem.

Guus Hiddink has called up Augsburg's Paul Verhaegh as a replacement.